Schonbrunn Palace is one of three large palaces located in Vienna Austria.

Completed in the mid-18th century, the palace was intended to be the summer residence of the Austrian Royal Family.

The royals of the time wanted a grand palace that would rival the Palace of Versailles in grandeur. The certainly achieved their objective! 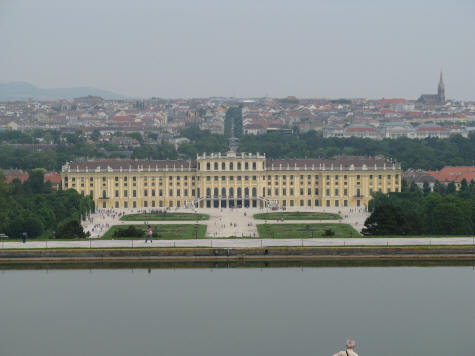 Schloss Schonbrunn is world-famous for its fabulous gardens and adjacent green spaces. The flowers on the palace grounds are maintain meticulously throughout the year.

Manicured hedges, tasteful fountains and reflecting pools all help to make Schonbrunn the impressive palace that it is. The palace grounds also have many hiking trails.

The best view of Schonbrunn Palace is from the monument located at the top of the hillside. Called the Gloriette, this attractive building features a cafe and restaurant.

For a small extra fee, tourists can climb the stairs to the viewpoint at the top of the building.